Joey Votto has been one of the most consistent hitters in Major League Baseball for the last decade.

He is everything a traditional stathead wants to see.  High batting average, on-base percentage, and slugging percentage.  Lots of RBI(s) and a below league average K%.

I have to admit, I have overlooked the impressiveness of his career.  I mean, I knew he was good, but until I started looking into material for this post I had no idea he was THAT good. 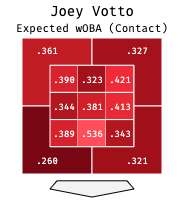 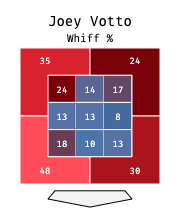 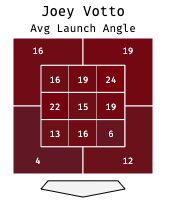 He’s as complete of hitter as there is.  But he does lack one thing.  He never pops up. 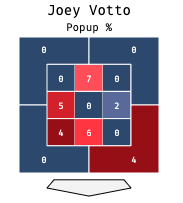 More than that he never pops the ball up in the infield.  In 3,582 plate appearances from 2014-2019, Joey Votto has popped up in the infield a grand total of 6 times.  You read that right.  Just 6 times.  INSANE.  I mean, I made a short MiLB career out of striking out and popping up in the infield (hitting is hard).  Thus, I’m writing this blog and he’s making millions squaring up baseballs.

Back to the point: In the flyball revolution, Joey Votto is the man. 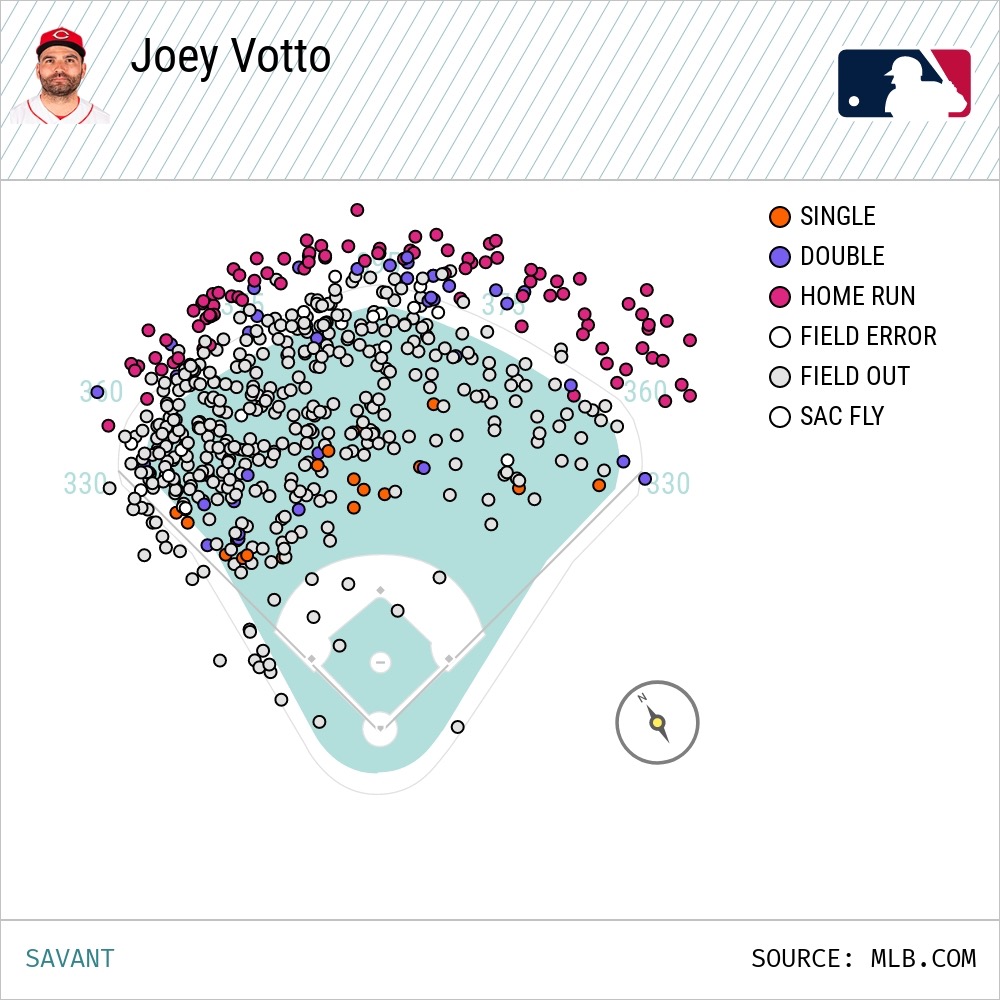 (Image courtesy of mlb.com, usage is for educational purpose)

He has some physical attributes that someone can’t explain.  Barrel awareness, bat to ball skills, and swing decisions. He swings at strikes and he hits them solidly on the barrel.  How does he do that? Years and years of pursuit of the craft.  You just have to log the hours.  There is no secret or short cut to that point.  Let’s dig deeper on some of his important swing qualities.

In order to create the most efficient swing possible giving him the most variability to adjust as possible, Votto maintains his connection during his acceleration.

What does this mean?

In a lot of amateur hitters you see an “early disconnection” swing fault.  What this means is that their arm “disconnect” from their sequence of rotation (hip, chest, arms, bat) early, and they essentially are just pushing the bat at the ball.  This gives them no adjustability along with no ability to create vertical bat angle (more later).

Looking at the below gifs you can see a pitch he is slightly fooled on.  Because he is letting his torso accelerate his arms, he has time and space to adjust the barrel to the pitch down.  If he had disconnected earlier in this process you would have seen his hands race away from his back shoulder in the turn and probably resulted in a swing and miss.

Here’s another look at how he stays connected and his hands stay tight to his back shoulder as his rotational sequence unwinds.

In the post about Mike Trout (HERE) we talked about vertical bat angle and how it optimizes against pop up mis-hits.  To quickly review, if you have a bat with zero degrees of VBA then if you mis-hit the ball on the top or bottom of the barrel the result would either be a chopper ground ball, or a pop up.  The more you tilt the barrel towards the ground and below your hands, creating more VBA, your mis-hits on the top and bottom of the barrel become more left to right

As a matter of fact, Joey Votto ranks in the top 1% of vertical bat angle for players in the big leagues.

On middle-inside pitches Votto has a vertical bat angle of 41.6 degrees, middle-middle of 42.1 degrees, and middle-outside of 35. degrees. The league average of vertical angle on these same locations weer 32, 30, and 28 degrees.

On low-inside pitches, Votto has a vertical bat angle of 46.3 degrees, on low-middle pitches of 43.2 degrees, and 38.7 degrees for low-outside pitches. The league average for these same locations are 39, 36, and 33 degrees.

Because Votto does such an amazing job maintaining his connection, he is able to turn hip hinge/forward posture into side bend while keeping his hands up.  This creates vertical bat angle because if you maintain your connection your bat is going to rotate 90 degrees to your spine angle as you see below.  He doesn’t drop his hands or “push” at the ball.  He’s turning and side bending to it.

From the above gif you can see Votto is “staying through the ball”.  Essentially what that means is he is maintaining a neutral horizontal swing direction in the path of the pitch.  He’s not swinging across it or rolling over through it.  By tipping the bat vertically he is aligning the sweet spot of the bat to the vertical pitch plane, and by eliminating any horizontal swing direction he’s ensuring that if he squares the ball, it’s going to be a line drive with true spin. Guaranteed. Write it in ink.  There is no way it can’t be.  Derek Jeter made a career of this also, but that’s another post on another day.

You see this swing quality in a lot of the great hitters today.  Below you see Nolan Arenado.

He’s not giving up an inch of horizontal swing direction.  His swing direction below is approximately +20 degrees pull side as he’s had to shift his swing axis to adjust to the pitch down and in.  Still at that, his arms are swinging down that line.

Combining barrel awareness, swing decisions, bat to ball skills, connection, vertical bat angle and horizontal swing direction (along with others such a strength, mobility, perception…….) Joey Votto is one of the best hitters of this generation and basically NEVER mis-hits a pop up in the infleld.

(I don’t own the rights to this gif either but it’s funny….and awesome)

Leave a reply Click here to cancel the reply